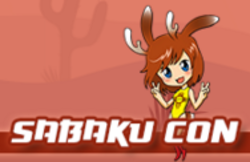 Anon
Had a great time, but it is a small show!
The set-up was weird, but overall we did okay.
Didn't see too many "resell" artists, but there were a few (mainly selling their old plushies, or something).
But this is a small, local con. None of the big name artists come down because it's not a big show. You can't expect them to.

As for the staff, they were helpful and kind. I've always had good experiences with Monkey Paw.
Albuquerque is pretty close, so it's doable.
I ended up re-buying my booth due to placement and requests for me to come back.
A couple other non-resell artists and not printer paper artists re-bought too.
Don't be salty.
May 17, 2016, 10:54 pm
Overall
Venue
Staff
Layout
Attendance
Affordability
1
0

Artist
Not the best, but one of the only
Sabaku is the biggest anime con in the state of New Mexico, but there only seem to be two or three, so thats not a huge accomplishment. The convention never responds to emails, and when you call, they'll say "call back tomorrow and ask" or "the information will be online in a week" and never actually get you the info you're looking for. The only way I was ever able to actually get a response was through Facebook messenger, and even then I had to fish the answers out. They just moved to a new building which was "bigger", but it's really not. There are no places to sit or gather in the main area, so people just camp out in the aisles in front of artists booths, because of the subpar layout. There is no jury, booth sales are first come, first serve, and it shows. While there are more artists who sell the national standard of prints and acrylic charms than ever, there is still majority printer paper artists, people who resell things straight from China, and people treating the AA like a yard sale to sell their old manga and Pokémon cards (wtf Sabaku). The worst thing was a few of the artists were terribly annoyingly talkative people, and it led for a whole section to have terrible sales from attendees avoiding them. Like most Monkey Paw cons, they offer you the chance to buy your space again for the next year at the end of the convention, trying to basically turn their AAs exclusive to (I guess) try and keep the same sort of terrible shit being sold there, as the only ones who seemed to actually buy the booths a year in advance were the annoying resell "artists" and the printer paper artists. If you're used to Monkey Paw's bullshit and are willing to take the risk of shitty sales, or are just local, sell at this con. Otherwise, save your money and time and plan for a better con elsewhere.
May 17, 2016, 2:02 pm
Overall
Venue
Staff
Layout
Attendance
Affordability
2
2
Leave your rating